My book The Inscriptions of Ralph Beyer was published on 11 January 2021 by the Crafts Study Centre and Lund Humphries. You can read a blog post about writing the book on the Lund Humphries website. 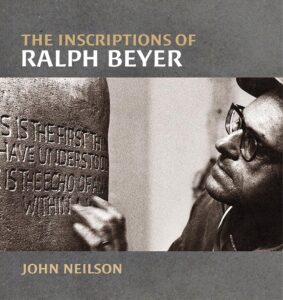 Ralph Beyer (1921-2008) was a lettercarver. Exiled at the age of sixteen from Nazi Germany, he made his home and career in Britain. He is best known for his huge ‘Tablets of the Word’ in Basil Spence’s Coventry Cathedral. These broke the mould of classical formality associated with British lettercarving after Eric Gill — their irregularity and roughness offending conventional notions of ‘correctness’. In fact, Beyer had spent a few formative months in Gill’s workshop, but his own unique voice owed as much to his childhood in Weimar Germany and his father’s wide interests, which ranged from Modernist architecture to ‘primitive’ art. In Britain, Beyer came to know Henry Moore and Nikolaus Pevsner, and was influenced by the artist and poet David Jones. He thus straddles both German and British traditions in lettering as well as the wider art world. This book, profusely illustrated, charts Beyer’s increasing sensitivity to words and their realisation in stone. It places his inscriptions, and to a lesser extent his typeface design and sculpture, in context, in the process raising questions about hand lettering itself and what place the making of stone inscriptions may have in the modern world.

There is a foreword by the potter and writer Edmund de Waal, who says: ‘In this magnificent book John Neilson uncovers the legacy of Ralph Beyer with huge sensitivity. It is marvellous to be reminded of this strong-willed, passionate, cultured force who brought alive words and stone.’

The book was reviewed by Tanya Harrod in Apollo magazine: ‘…splendid and comprehensive account of the work of Ralph Beyer… Neilson’s handsome book with its splendid images and a full checklist of all Beyer’s work…enables us to engage fully with this remarkable artist.’

The book is obtainable from bookshops such as Booka in Oswestry, or can be ordered direct from Lund Humphries.